Drone shooting in various angles is pretty amazing! Shooting in resolutions in up to 4k, this device is well on its way to achieving greater success. Are you curious to know a little more about how drones have been used in multiple ways?

These state-of-the-art machines are more than just a floating camera for top notch pictures and videos, the versatility is unique and ever changing in our modern society.

So maybe you have never used a drone or maybe you have, either way, I will teach you a thing or two about the history, how efficient they are in other ways and how these great machines have changed our viewing experience for the better!

Movies and films make the imgination come to life. The audience are kept focused by interesting characters and storylines. Anything from a location, prop, camera angle, use of graphics quickly form an opinion. Film production is constantly progressing with modern technology and is almost in constant battle to bring the next big thing on to our screens.

7 Hours On Earth shows us how drone shooting can change our experience. In the introduction, mystical clouds make it seem like we are flying when we are not. Then we see the drone produce a wide shot over London. There are many ways that drones can create good content.

What are the benefits of using drones in the industry?

Drone technology has made drone shooting from high up easy to access. In 2014 it was made legal to use drones in TV and Film. As a result the machines have to be regulated by the Civil Aviation Authority. Film makers would have to put in effort to get cool shots from the sky. Today, this isn’t a problem because pilots can operate them from the ground. The standard commercial drone weight is 1,200g. 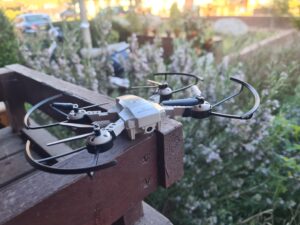 The use of drones was not always used in TV and Film. In fact, they were used way back in the 1800s for hiding and dispensing missiles. In 1849, an Austrian field Marshall didn’t have suitable weapons to affect the while city of Venice. Drones became a weapon and carried bombs that weighed up to 14kg. Over a century later in 2006, they became part of disaster aid and humanitarian use. Around the same time the US government made drones legal for their civilian airspace for the use of finding injured people from Hurricane Katrina.

What are the benefits of using drones in the industry?

Low costs are a big factor in the TV and Film industry. Commercial drones can cost up to £300 whereas professional drones can cost over £1,000. Helicopters would have cost much more to hire before drone shooting became legalised. Getting too close to buildings is high risk therefore drones are a good option because they have the same camera quality and are light enough to make drones shooting high up safer.

China is the biggest rice producing country in the world. They also feed 22% of our population because they grow food anyway that is good enough to live. Food can be grown on the side of the road and on the walls of buildings. There was a time when this wasn’t possible. Rice and livestock are always in high demand. As a result farmers have had no choice but to move further towards the city for better housing and education.

A revolution has hit China! Drones. Technology and agriculture have merged together as one. XAG is a technology company that operates their machines specifically for the efficiency of agriculture. Co-founded by Justin Gong, this revolutionary company operates in 42 countries worldwide. They plan to provide sufficient and safe for for the next 100 years because of how efficient they are. The modification of these unmanned aircrafts help with many other uses

The future for us looks promising! It’s great how far technology has come with drone shooting. With the amazing work that XAG provides us, the next 10 years will be great. I am sure that once Chinas revolution hits every country, there will be something amazing on the horizon.

For more information and help with video production in London, get in touch