A groundbreaking year for female filmmakers 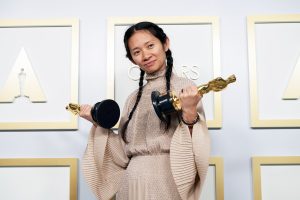 2021 was a great year for film, despite all the added difficulties of shooting during the pandemic. All creatives fought against the odds and managed to produce high quality films that briefly managed to distract us from the surrealism of our actual daily life.

But some filmmakers fought against even more odds, with female directors, producers and other creatives breaking through the glass ceiling and winning some of the biggest awards of the year. In fact it was a record breaking year for the Oscars, with more women nominated than ever before, making it a historically significant year for female filmmakers as explained in this article. 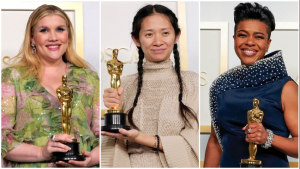 The percentage of women nominated for Academy Awards was still consistently lower than that of the men, with only the documentary category including more female filmmakers, but at least we proved a point by winning some of the biggest categories.

Let’s take a look at some of the female led productions which got the attention and success they deserved, and which happen to be some of my favourite films of 2021’s award season.

Chloé Zhao made history in 2021 for female filmmakers by winning Best Film and Best Director at the Academy Awards, the BAFTA’s and the Golden Globes, all for her adaptation of the book ‘Nomadland’. With Frances McDormand also receiving her third Best Actress Oscar for her performance as a woman who decides to live as a modern nomad in a van. It is a unique combination of real people and situations, along with scripted and performed material. Zhao is also the first woman of colour to win Best Director.

Take a look at her beautiful, encouraging acceptance speech:

Julia Ducournau became the second woman ever to win the Palme D’or in 2021, and the first to ever win it alone, with her shocking, disturbing, uniquely original and unexpectedly sweet body-horror. Some people were seen leaving the screening, feeling sick, needing to vomit, and some even apparently fainting, due to the graphic nature of the film. I can say myself it is definitely not for everyone, but it is a fantastic film, and a truly significant moment in history for female filmmakers.

‘My heart is exploding, it’s not even of pride, it’s of optimism and faith’, she says in a touching comment on her success at the Cannes Film Festival:

Not only did Emerald Fennell win Best Original Screenplay at the Oscars, with her directorial debut, which she wrote, co-produced and directed, but she did so while making an important point about the female experience. In this dark comedy, a young woman, angered by the constant sexual harassment, assault and manipulation that women experience, seeks revenge on all men who do these things.

It makes a powerful statement for female filmmakers and women everywhere, especially because guess what… she was 7 months pregnant while directing it!

One night in Miami by Regina King

Regina King brought Kemp Powers’ play to life with this film, in which Muhammad Ali, Malcolm X, Sam Cooke, and Jim Brown spend an evening simply talking about the Civil Rights Movement and their roles within it. It is a minimalist production, set almost entirely in one room, depending mostly on dialogue and the actors’ performances, which they absolutely perfected. 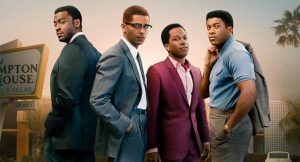 It was nominated for 3 Academy Awards, 1 BAFTA and many more awards. Although not winning those big ones, it was definitely a memorable film and a big moment for female filmmakers, particularly female filmmakers of colour, and an educational experience for people like me, who grew up with little to no formal education on the Civil Rights Movement and the iconic individuals involved in it.

A film about family, about struggle, about friendship, about childhood, this is a movie I won’t be forgetting any time soon. Although it did not have the same global success as some other films mentioned here, this project has the ability to empower women and girls everywhere, both through its narrative and its inspiring crew. 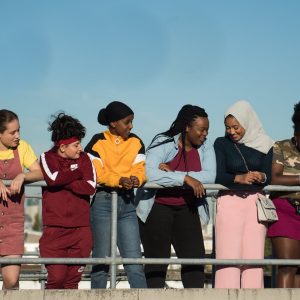 This film was made and performed almost entirely by women and young girls. Women were the writers, director, producers, cinematographer, editor, composer and led every single other department. If you’re a woman working in Film or TV, you will know how rare a credit list like this is, and you’ll understand why this production meant so much to me. The story added to that feeling, by being equally uplifting and empowering, as described in this review. It was nominated for 7 BAFTAS and Lucy Pardee won the Best Casting award.

I could keep going on about the amazing female filmmakers out there, but there’s so many talented women in film right now that I would never be able to stop typing. So just go watch some of these great films and see for yourself.

This female filmmaker is currently working at Nostairway, so if you have any video needs, either for yourself or your business, contact us today.