Film Festivals Report #2 And The Winner Is

Contents hide
1 We won an award at one of the major film festivals.
1.1 As Film Festivals Go, This Takes The Borscht
1.2 You Can’t Have Film Festivals Without Parties
1.3 And Now The End Is Near

We won an award at one of the major film festivals. 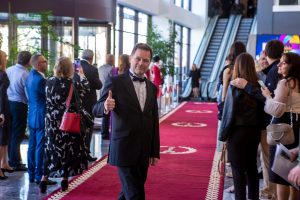 I must admit it came as a bit of a surprise to win at one of the most respected film festivals. I had spent the week surrounded by some of the most revered film makers in the world. They were there to pay homage to film makers whom they respect. And there was our little film, tucked in with the heavy-weights. I watched a stunning film based on Dostoevsky. There was a brilliant testimonial film to Razlogov Kirill, the art director of SIFFA who sadly passed away this year. Luba Balagova stated that the testimony was intended for him to attend and not as an obituary.

We won the award for Best Music In A Full Length Feature Film. This is particularly pleasing as I had the pleasure of working with some fantastic artists who have really made a difference to the output. Karina Stevens is a very talented singer. She sang the song Believe, a co-write that we produced a few years ago. The song fitted into the film perfectly as it encapsulated the hopefulness that is embedded into the script. Karina’s voice has a fantastic range and has been noted in the film festivals that we have entered.

Carrie Cooper has a silky smooth voice and breathed life into the theme tune of the film – Key To Life.  I have worked with Carrie many a time over the past few years, she is a true professional and has melted many a heart with her singing.

As Film Festivals Go, This Takes The Borscht

Film Festivals are great places to meet other film makers.  In this case I met some of the biggest names in Russian TV and Film along with some serious global talent.

And, of course, when attending film festivals, you have to see some films.  I was not disappointed. I saw a beautiful film by the very talented film director, Kripal Kalita. Bridge is set in a remote Indian village and concerns itself with the problems of rural life as backdrop to those who have moved to the city. The film won the director an award and also the lead, Shiva Rani Kalita also gained an award as best debutant.

Stephen Moa’s excellent ‘Warning’ picked up two awards, and well deserved they were. Set in the near future, this somewhat distopian film explores several interconnected lives, one of whom is floating in space.

You Can’t Have Film Festivals Without Parties

Oh yes. SIFFA knows how to that very well. Despite seemingly crippling restrictions, Luba Balagova and her team managed to keep hundreds of festival guests and participants very entertained. We were treated to some of the best restaurants this film producer has ever seen. And I have to admit, after indulging in quite a few wines, supplied by Sting, no less, I ended up on stage.

And Now The End Is Near

The final curtain, in this case, was the awards ceremony. An event I will never forget. Film festivals are a mixed bag in general. But The Sochi International Film Festival And Awards has stood the test of time exceedingly well. This festival just keeps on getting better and I for one hope to be involved in some capacity in it next year. If you can pull something like this off under the most difficult of circumstances, just imagine what you can do when you are unshackled.  Than you SIFFA for an incredible adventure and memories I will never forget.  Here’s to next year and the continued rise of one of the great festivals among all film festivals.

Nostairway Creative is a video production company in London and can take on any project, from marketing videos, to voice overs, to feature film. So contact us today with your London video production needs.