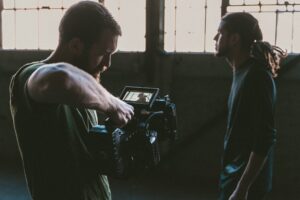 the opening credits of a film are more rigid than the order of the closing credits. the typical order will be as follows.

The film distributor is usully responsible for financing the film, they are different from the prodution company.

They work on creating the content. Thy are usually involved in multiple aspects of video making.

You may sometimes include this credit to say “A (Name) Picture” which would set the audience up for this filmaker’s style. This can be contraversial as it can potentilly alienate the other collaborators.

The stars of the film will be placed top, with their supporting stars coming after them.

The person who was in charge of gathering and auditioning the talent into roles.

The person who created or scored the music in the film

In charge of wardrobe for all actors and extras.

Second hand to the producer

Cuts the film together.

Designs the set in the director’s vision.

Or cinematographer, works with camera and lighting to make sure the action is captured in the way that the director wants.

This role involves a number of things, including overseeing the producers on behalf of the financers or being the person who initiated the project.

Producers also have a number of roles including managing the budget, cast and crew hiring and operations of the set.

The screenwriters who wrote the screenplay.

The director gets the last title card.

The closing credits can vary a little more than the opening credits. There are some factors which can affect the order, such as level of contribustion and the number of people involved in the production.

Including the performers and choreographers.

For those in charge of preparing, orchestrating, and editing the music.

In charge of shooting supplement footage for the film.

Involved in the production, like the Writers Guild of America (WGA) and the equipment makers.

Confirming the fictional nature of the film and adherence to animal welfare laws, if applicable.

Check out our other articles on video production and get in contact if you need help with your next project.