How do I achieve good audio quality?

The most important reason for good sound is that it is essential for good storytelling. Audio is very powerful and versatile for video, TV and film. Good quality audio and music encourage the audience to feel emotion and connect with the characters. Low budget video often neglects audio because the main focus is on the video quality. Many film makers prioritise audio before video.

There are two main elements to videos; picture and sound. Good audio quality is often a secondary factor for low budget video. Audio should be a primary factor. Many people overlook audio because video quality seems more important however,  music and audio provides just as much entertainment for audiences. 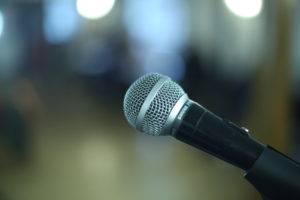 Dynamic microphones have three main parts. The diaphragm, voice coil and magnet. They have a simple design. The sound waves from the microphone cause a wire or coil to vibrate in a magnetic field that produces a current.

Condenser microphones also have three main parts. The diaphragm case, diaphragm, and the back plate. This microphone is a little more complex than the dynamic and can pick up a wider frequency response, plus a more natural sound. The condenser microphone can be useful background noise rejection.

Ribbon microphones – this microphone has a very natural sound. They actually fall into the dynamic category. This microphone got its name from having a long sheet of aluminium that is a primary function in this microphone. Not all of them are made with aluminium but most are. The thin peace of ribbon vibrates and is suspended into a magnetic field.  It usually provides a warmer sound.

Polar patterns determine what area around the microphone picks up audio the best.

Cardioid – audio that is mainly picked up at the front of the microphone. If you were to speak and move around the 180 degree radius, the sound will start to drop off, cutting off higher frequencies picked up,Omnidirectional – is a microphone that picks up sound all the way around its 360-degree radius. The volume is consistent and there should be no drop offs.

Super cardioid – has a pick-up field that is narrower than a standard cardioid microphone. This means that there is more side rejection and recording with this microphone is more focused on the sounds coming out of the front. The downside is a slightly thinner sound.

Figure 8 – has a very unique polar pattern. The front and back of the microphone are the only areas that are sensitive to sound, hence the name because of the figure 8 shape.

Hyper cardioid – is very similar to the super cardioid microphone in terms of having a narrow pick up field. This microphone capture area is even narrower, but again, at the expense of sound depth.

Reflective sound – we hear reflective sound later because it bounces off surfaces before it gets to our ears. In an average room, there is 6 surfaces that sound will hit before the ear. A disadvantage of reflective sound is the interference pattern it creates when it hits a surface. This changes the original sound wave.

Sound proofing – is used to decrease the level of sound travelling in and out of a room. Heavy building material can be used to insulate the room. You can also seal any gaps in the rooms and seal windows for extra sound proofing.

Acoustic treatment – is used to manage the reflections in a room to make sound recordings clearer. There are 3 things to consider to make your room sound better:

Cabling quality makes a difference. Having the right cables for your audio quality is important. Lets talk cables. Unbalanced cables – also known as instrument cables are used for instruments such as keyboards and guitars. Ideally these cables should be less than 25ft to reduce the risk of unwanted noise. Mixers are often longer than that so this is where the direct box comes in to it. The direct box converts an unbalanced signal to a balanced signal and sends it to the mixer without unwanted noise.

Balanced cables – are also known as microphone cables. This cable comes out the other side of the direct box. The reason for this is because this balanced signal can be over 100ft without picking up unwanted noise. Balanced means there are two inner cables, each in opposite phase to the other, delivering the signal. They are close to each other and, when external noise affects the one it affects the other in exactly the opposite way, thus canceling out the noise.
Speaker cables – look very similar to balanced cables so be sure not to get them confused. If you use an instrument cable as a speaker cable, you will be sending a huge amount of power through wires that are designed to carry small amounts of power. Also, your speakers won’t have the best quality. This could result in the instrument cable short circuiting.

A DAC is a digital to analog converter. This device converts a digital signal into an analog signal. This is then amplified and passed through a speaker. Signals from a digital domain can be stored on CD’S DVD’S and computer files etc however they aren’t useful to us unless they are converted back to analog. These signals are made up of ones and zeros known as a bit. These converters are useful because without them, we would see the digital signals that only electronic devices can read. Nowadays mobile phones etc have a DAC built in to convert the audio and music for crisp and clear sound.

Digital signal processing is a software that will take your digital and process it into a different signal. This software is used to tweak audio to make it sound better. There are other uses for DSP such as an equaliser for a room. This helps balance out the sound for good audio quality as the quality may be a little off because of the walls and floors.

It’s really important to monitor your audio. Headphones are great for listening to audio recordings as you can bring them everywhere as opposed to speakers. Monitoring will help detect unheard noises whilst on set that you may not have heard before.

Another reason for monitoring is to avoid something called digital clipping. Digital clipping is a crunchy noise that occurs when the sound on set gets louder than the pre-set audio levels. This can be an issue that could cost a significant amount of money to shoot again. If you try to fix the audio in post-production, it’s going to be a real challenge.

Good quality monitors are essential because they monitor your tracking, mixing and mastering which will ultimately contribute to the decisions you make. When choosing monitors, there are some things to consider. There are two broad categories of monitors:

Active – these monitors are what we work with mostly nowadays. They have everything built in already.

Passive – these monitors require an external power amplifier. It’s important to match the external amplifier with the monitors for the best quality.

Headphones are great for monitoring your audio.

A good way to avoid this is to move your microphone to the side of your mouth. Doing this will push the built-up air pass the microphones diaphragm. The distance should be 45 degrees to ensure the cardioid polar pattern will avoid these harsh pops of air whilst recording. Pop filters are another way to avoid plosives.

You might find this article on the feild of voice-over production interesting.