Production means ‘the process of manufacturing or growing something in large quantities’. Therefore, film production would be this but for films. 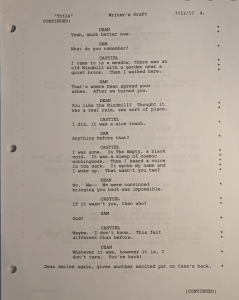 This would mean that you would need someone with an idea, which, with the help of talented writers, can create a good script. This script goes through many drafts, until it is perfect. The average number of drafts a script goes through is around 20. Heres a link on how to write the perfect script.

This does confuse me as to how the director got away with such a poor script. Not only did it have to have had around 20 drafts, but it would have also had to have gone through dozens of people to make sure nothing else needed improving; but I digress.

The next step to producing a film would be that you would need a cinematographer who can truly capture your vision. They would need to be able to understand how to work the camera and set it to how the director would have imagined it, but would also have to be confident enough to suggest their own tweaks and improvements for the benefit of the shot. This would infer that communication is key, right?

Well on this particular film production, communication was non existent. The cinematographer would set the camera however they wanted without explanation, and the director would reply with a single ‘yes’ or ‘no’. This meant that the shot set up would take ages, sometimes hours at a time, while the actors and rest of the crew would stand idle, doing nothing.

After everything had been set up and shot, and the team was happy with everything filmed, The footage would be sent to the editors to sequence the shots together, thus creating a whole movie.

We hadn’t got to that part yet. We still had about 3 major beats to finish after the director’s accident.

I’ll try to map out the set so that you understand what fully happened. We were in a large studio, where the actors were in front of a green screen. To the right of the filming set was a ladder that led to a metal platform, so that a crew member could pour water from above with a metal keg, to create the impression of a waterfall.

Even though the keg was held by a rope so that it didn’t fall, there was also a circle marked on the floor in bright yellow tape. This was the forbidden area to enter in case the keg fell from above, fatally crushing anyone below.

Well, on this particular day, I was needed to pour the water from above. As predicted, the director had already taken about seven takes, and people were starting to get frustrated as it was an hour over lunch.

Luckily, on this rare occasion, he showed mercy and broke us up for lunch. Before I went down, I noticed that the rope’s knot was loose. It was my job to tighten it. I undid the whole knot to start again, and I was just about to tie another, when the director called me down.

Oh well. I’d do it later. He told me to get him a coffee from the cafe, so I did. When I came back, he wasn’t there. ‘He’s gone for a ciggy break’, one of the ADs told me. Fair enough. I put the cup of coffee on the table and noticed he had left his glasses on there!

I went to pick them up to give them to him, but they fell on the floor. I went to pick them up off the floor, but I had accidentally kicked them into the forbidden yellow circle. I wasn’t allowed in the circle, and by then, the director had called everyone back to start filming again. I had no choice but to go back to my original position.

I lifted the keg up to the ledge of the platform, and noticed that no one had yelled ‘action’ yet. He was looking for something. Then, the same AD pointed toward the yellow circle. The director was walking into the yellow circle to retrieve his glasses! I was so shocked that he had broken his own rule that the keg slipped from my hands, right on top of him.

It was a fatal accident.

Like I said, it wasn’t really my fault at all. Everyone was so tired form working so hard that anything could have slipped from our minds. This one just happened to benefit me, unfortunately. There was no need for an investigation, because everyone saw, it was an accident. Now we just need to get this film done, for the director.

This story is FICTION

if you want to contact use the link is HERE!!!