The Secret Art of Foley Recording

What is foley recording and how is it done?

If you don’t work in film, TV or radio, you might not even know what foley is. If that’s the case, then you’re living proof that the foley artists on the things you’ve watched have done their job well, because the best foley recording work should not be noticeable.

Foley is the process of creating, ‘performing’ and recording sound effects in post-production. These sounds are created both to replace and to co-exist with the film’s already existing audio. These sounds can drastically vary, from guns shooting, to waves crashing, to doors slamming.

Foley Artists are the people who physically create and perform these sounds. They require loads of creative thinking, but also a lot of energy, since they are on their feet for most of the day.

A Foley Mixer works closely with the Foley Artists at all times. They listen carefully while recording, control the audio levels, guide the Foley Artist and pick the best options.

So let’s take a look at the different types of foley recording that are required in audio post-production.

Footsteps are probably the so 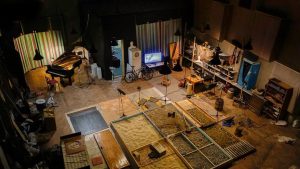 und recorded the most in foley studios, with artists recreating every step the actors take. This may sound simple, but actually requires a lot of preparation and precision. They need to take into account the actor’s foot size, their weight, the type of shoe they’re wearing and of course the floor surface. A woman walking in high heels on a hardwood floor would sound nothing like a larger man walking in army boots on the dirt.

This is why large foley studios often have an entire room dedicated to steps, with every type of floor surface you can imagine and a large collection of shoes.

Photo found in this article form the University of Silicon Valley. 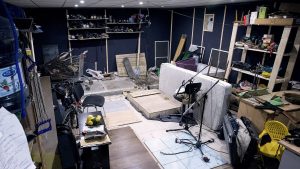 uire the use of different textiles, to recreate the sound of clothing rubbing against itself, someone stroking another person’s sleeve, grabbing something from a bag and so on. No matter what the movement is, the fabric the actors in the scene are wearing or interacting with determines the sound that would naturally be created. 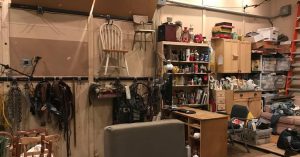 Pretty much any other sound that’s not created by human movement. This can include doors creaking, wind blowing, swords swinging, monsters growling. Sometimes they will use the real thing, for example opening and closing a small gate in the studio or shooting a real gun, but other sounds can be recreated with surprising alternatives. For example in foley recording, coconut shells can be used to make the sound of a horse walking, although some artists have other preferences for this.

For more details and examples you can read this article on foley recording.

This is just a brief look into the world of foley recording, and the creativity that goes into it. There’s many more sounds and effects that go into the audio post-production of any project. So next time you’re watching a film and, for example, someone gets stabbed, try to guess how someone made that sound. And if you’re interested in working in film audio, but want something a bit more hands-on (literally), maybe foley is the career for you.

There’s no specific qualification needed, just practical experience which you can get by shadowing or assisting a foley artist. For more advice you can visit this article.

Here at Nostairway we may not have a big budget studio’s foley facilities, but we do have excellent audio recording equipment, a very experienced sound specialist, and most importantly a lot of creativity and ideas. So if your video, promo, music video or film requires some foley, contact us today and we’ll see what we can do.