Video Production Services – How Have They Changed

It isn’t surprising that video production services, an industry so linked to technological development, should change just as rapidly as the tech toys associated with it.

Video production services have followed tech development like a train on a track, and sometimes laid its own track t’boot.

The invention of video tape back in the 1950’s (believe it or not) saw the first sparks of changes in how the art of motion pictures could serviced in new ways. It was a company owned by Bing Crosby in the U.S. the demonstrated the first video tape recording, thus kicking off the industry of video production services. 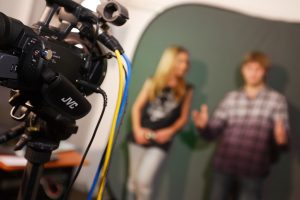 But the motion picture industry centres around an art form and so video production took its lead from many different sources. For instance, in the mid 50s in Paris, a new wave of film makers were hitting the streets armed with the latest 16mm shoulder mounted film cameras. The idea that one could just-grab-the-gear-and-go appealed to these young upstarts and the resulting footage reflected the energy its makers had for the job.

How does this lead to video production services?

It wasn’t long before video tape was employed in shoulder mounted (and later hand-held) cameras. Tape could be recorded over time and time again, like audio tape in a studio. This development spurned even more ‘Film Makers’ to get out there and make stuff. Soon, there was a great deal of video footage in existence that need editing, distribution, archiving and many other services. Enter video production services and an explosion of companies to provide them. Of course, many of these companies also offered to shoot video as well as all the other production services.

When the internet came along, the game changed completely. Most of the data today that passes through the internet is video data. The demand for video is ever-increasing. New video production companies are popping up ever day. And it isn’t just a quantitive demand, there’s a growing and constant need for immediacy. This has led to a growth in live streaming. Many commentators think that live is the new flavour of the month. There are control desks that hook up to the internet directly and can switch between several cameras rendering the living room into a live TV show. What is the future of video production services?

The future of video production is very exciting. With the advent of new technologies, video production services are becoming more and more accessible to businesses of all sizes. In the past, video production was a costly and time-consuming process that was typically only affordable by large corporations.

However, thanks to advances in video editing software and the proliferation of online video hosting platforms, video production is now within reach of even the smallest businesses. Moreover, with the rise of social media, video marketing has become an increasingly popular and effective way to reach out to potential customers. As a result, demand for video production services is growing at a rapid pace, and the future looks very bright for this industry.

Take a look at some of the Nostairway video productions to get an idea of how we go about making video.