Are Videographers replacing cinema in 2021?

Contents hide
1 According to Google, the definition of a ‘videographer ‘ is ‘a person who makes video films.’
1.1 The Difference

According to Google, the definition of a ‘videographer ‘ is ‘a person who makes video films.’

One may assume that film cameras are an essential part in making a film. I mean, it is in the name.

However, in the age of ever-advancing technology, filmmaking has become easier than ever. Anyone can technically become a videographer, they just need to invest in the right equipment, or even use their phone if it has a good camera. But, being a videographer isn’t just a good camera, it’s skill and practice.

We have cameras in our pockets that we carry every day. With social media apps, such as Instagram and TikTok, becoming increasingly popular, more people are becoming inspired to create and share and become their own videographer.

But does this mean that cinema is being replaced?

Technically anyone who has recorded anything in their life is a videographer. It’s all about where you choose to publish the film that is the bigger question.

For example, feature films have their grand spaces to share, via the cinema, or on streaming platforms such as Netflix or Disney+. Shorter films tend to have their own space to share through apps such as Youtube or Instagram. Both have their pros and cons.

Social media apps are a lot shorter, have less detail or room to explore plots. However, they appeal to people with shorter attention spans (something seen to be more common within young people now more than ever). They are also more or less free and are easy to access.

As an example, Crypt TV, a YouTube channel that make short horror films. One of their most interesting films being ‘One Please’

While feature films do have more context, more of a story structure and the advantage of the cinema experience, the places in which they are shared on aren’t always as accessible. For example, not everyone is willing to pay for a movie in a streaming site they are already paying for. Moreover, it’s harder to fight for an audience’s attention once they’ve lost it. It’s not as easy as scrolling to the next film.

Overall, the question was a bit dramatic. In short form, no. Apps are not replacing cinema. However, it is difficult to answer without thinking of the impact these apps have had on young minds, and whether or not these impacts are positive to the future of videography. We’ll just have to wait and see. 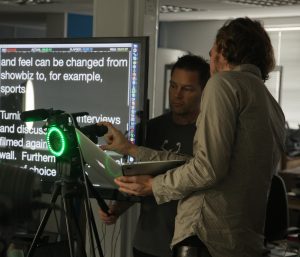 For any of your videographer needs, get in touch with Nostairway Creative today, we are a video production company in London, up for a chat and a free consultation. We can discuss a price, a timeline and how we can make your vision come to life, from pre production all the way to post production.